What does not destroy me, makes me strong.

Just like muscles, when your mind breaks down, when it is depleted, it repairs and builds itself back stronger. I like to think after taking on the Transylvania 50k, I have built myself up stronger. Time will tell how lasting that strength is.

Transylvania was a beast of a race. Let me start with the elevation. The overall gain was 3,328 meters or 10,919 feet.

It is a race that goes through the Bucegi Mountains in Romania, which is part of the Carpathian Mountain Range. It started in Bran, a small town that houses the infamous Bran Castle, Dracula’s home. After the start, it went straight up into the mountains. 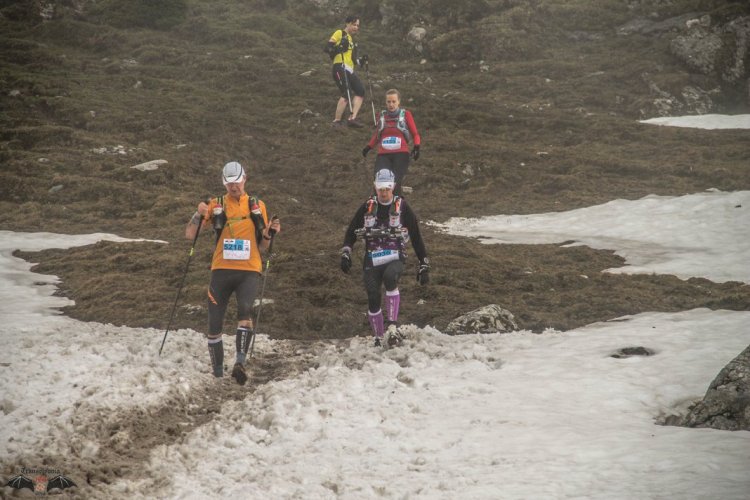 One of the harder moments in the race was when I saw the steep, snowy, narrow gorge that we had to climb. I actually gasped when I saw that. I am not a gasper.

But, what does one do? One powers onward and upward. I took a quick bite to eat to restore energy. I drank some water from my hydration pack, threw back a salt tablet, and started, step-by-step up the gorge, following a line of runners. I was about halfway up the 900 meter climb when I heard a lot of yelling. Confused, I looked up and saw a man falling from the top. He was sliding, rolling, knocking people over as he fell, even catching air. A few men tried to stop him, but could not break his fall. By the time he was a few feet in front of me, two men had had time to plan catch him together. They thankfully were able to stop him from falling all the way to the bottom. After checking on him, offering food, and trying to figure out how badly he was hurt, we had to move on. It was not safe to stay there for long. I truly do not know if he broke anything, but there was no way any rescue team could have gotten him off that mountainside. He had to have continued to retrace his steps. After that, I made each foothold a careful decision. I went one step at a time, thinking I simply had to be okay and get up that gorge, without quite literally killing myself.

With all that elevation considered, we also climbed up narrow gorges, endured hail for a few hours, ran with lightning that was too close for comfort, and a pushed on through steady rain the rest of the day. The sun did not grace us with her presence. With all that rain comes mud. The mud did me in. I was actually feeling quite well both physically and mentally, considering, until that mud showed up for most of the last 10k. I slipped, slid, and tripped my way down, which consequently led to swearing at the heavens and earth–swearing at the earth for what it unapologetically does; reminds us that it will forever be stronger than us. To be reminded of my own weakness, of all of our weakness, is an important and humbling reminder of nature’s power. There aren’t any mistakes in nature.

Somehow, through all of its harsh environment, or maybe because of it, Romania managed to amaze me with its absolutely stunning scenery. The views were breathtaking and vast. At the top, it was still, quiet, and unpopulated except for the odd trail runner. We ran in the clouds, haunting and sweeping though and onward as quickly as they appeared. The air was pure, crisp, clear, even if it was a bit thin. The infamous Bucegi Mountain roamer was not spotted–bear, wolf, nor Dracula.

I don’t think anyone can exactly answer the big whys of our psychology. Why do we run? Why do we participate in voluntary pain and suffering? Why seek this kind of adventure? Maybe it is human evolution and our primal drive to win that makes us partake in ultra endurance. I’m not entirely sold on that theory. I do think and accept there is a fair bit we don’t understand about the human spirit, or the runners’ spirit in this case, but I can say I got a little closer to understanding my own humanity and capabilities. One thing I can say for certain, my mind and body is restless.

I was prepared to repeat mantras to myself. I even had a few in my mental bank, but I ended up not really needing anything like that. I felt very much present and in the moment. I felt and thought about each step, each pain, each beautiful view. As I was getting closer to finishing, the kilometers felt longer and longer. I can assure you that a kilometer on the trail after running for hours, feels much longer and much more painful than most kilometers. Even through the pain I felt grateful, because as my husband reminded me right before I took off to the start line, if I am in pain, it means I am still alive. I finished with that thought in mind. 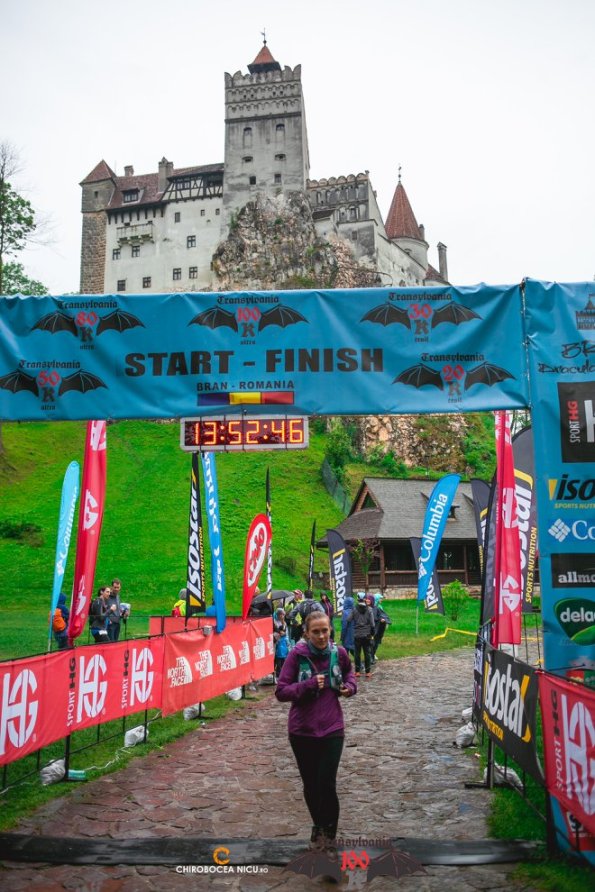 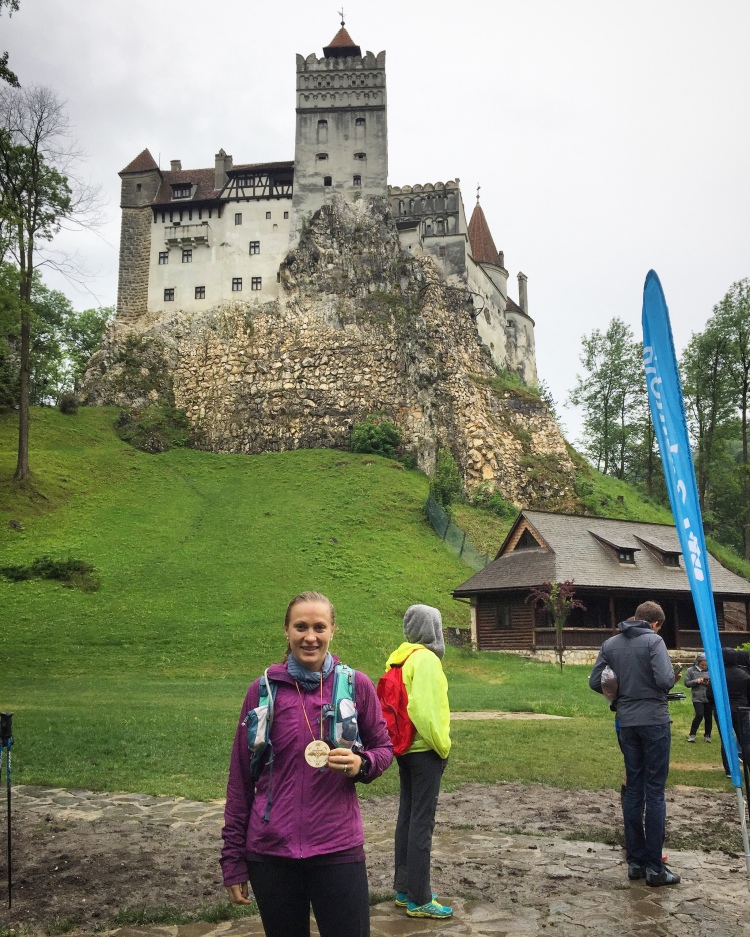 Connectivity. Perspective. Humility. Gratitude. This is what I gained along one of the

hardest races I have experienced. Connected to nature and all of its give and take. Perspective of what really matters in life. Humility in knowing how simple and vulnerable humans are, and also how there will always be someone stronger than you.
Crossing severe terrain, massive elevation, and seeing unmatched mountainous beauty like this was a once in a lifetime experience and I am grateful that I was able to be part of it.

Check out this cool video by Chrash700 on YouTube (I even make an appearance or two):

And this one by Arie Fishler:

I was not only able to see Bucegi Mountains up close and personal, but I also got to tour around Bran, where the infamous Bran Castle is; Dracula’s home. The night before before the race, we wandered around the small town, buying souvenirs and I tried a fresh pretzel from a local bakery (carb loading!). I sadly did not get the chance to try too many local Romanian dishes, but I would like to go back and complete the experience.

Usually, traveling takes the forefront of a lot of my races, but I just did not have the time to see enough of Romania due to only having the weekend for the race. Considering my race took all of Saturday, that did not leave much time to see much else. However, I did pick up some knowledge on Bran Castle, also known as Dracula’s Castle. Bram Stoker wrote Dracula with this castle being assumed as inspiration. Interestingly, Stoker never actually went to Romania. He wrote it from Britain using pictures of the castle to develop the setting. People have drawn comparisons between Vlad the Impaler and Dracula, whom was viewed as blood-thirsty and ruthless. Also, ghost and spirit folklore surround Bran; people that are normal during the day, but go around haunting and torturing others in the town at night. Perfect setting for a vampire tale, right?

In the castle, there were torture chairs, game rooms, stone walls, windows that looked out onto hills, and small winding staircases that seemed to go on forever. One could easily imagine a vampire wanting to reside there for eternity.

The castle was completed in 1388 with the purpose of stopping the Ottoman Empire expansion. Vlad the Impaler passed through Bran in 1459, burning surrounding villages and murdering hundreds of Saxons along the way. This is where he gets the ruthless reputation we all know him for. There were many kings, princes, and wars that passed through history here, where somewhere around the late 1800s, the castle started to fall apart. When Transylvania became part of the Greater Romania, Queen Maria restored it and used it as a residence. It eventually became a museum, and now legally belongs to Archduke Dominic, Archduchess Maria Magdalena and Archduchess Elisabeth.

After all the touring and race prep, we needed to work on our carb loading lunch. We ordered a few pints and just as they arrived, the storm rolled in.